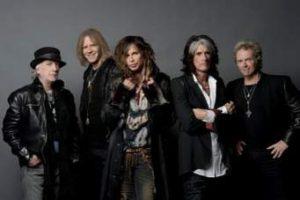 AEROSMITH, the greatest American rock band of all time, currently performing a series of Las Vegas residency shows called DEUCES ARE WILD, is heading to Europe to play a limited edition of shows!

AEROSMITH, four-time Grammy winner, announced the dates of the European tour, which will take place in 2020. The series of concerts will begin on 13 June in Milan, end on 27  July in Germany, and outside the Czech Republic, the band will also visit Belgium, France, Spain, Portugal, Austria, Poland, the United Kingdom, Hungary and Denmark.

The unique AEROSMITH lineup, which includes Steven Tyler (vocals), Joe Perry (lead guitar), Brad Whitford (guitar), Tom Hamilton (bass) and Joey Kramer (drums), a living part of American music history. During their career, they have sold more than 150 million albums all over the world, received countless awards and have been featured in the Rock and Roll Hall of Fame.

Four-time Grammy winners and eight-time American Music Awards winners across all genres – for example, the Best Rap Single award for the “Walk This Way” remix they co-hosted with RUN DMC. In January, AEROSMITH will be honoured for their worldwide philanthropic endeavors as they will become personalities of the 2020 MusiCares. In addition to a number of multi-platinum albums, AEROSMITH has for decades been the inspiration of many generations, making it one of the most popular bands of all time!

In 2020, AEROSMITH will be celebrating its 50th anniversary – no other way than performing a series of European shows across the continent. These will follow almost immediately after a series of residency appearances in Las Vegas in a program called AEROSMITH: DEUCES ARE WILD. It starts on April 6, 2019, will end on June 4 of next year, and already scores in various prestigious rankings.

During their fifty-year career full of ups and downs, AEROSMITH is still a name on the American rock’n’roll scene: they have sold over 150 million records, have been inducted into the rock’n’roll hall of fame, won countless different awards including 4 Grammy Awards, 12 MTV Awards, 8 American Music Awards and 6 Bilboard Awards. Worldwide, they have a huge fan base known as the Blue Army which includes more than a million members.

RECOMMENDATION: PURCHASE TICKETS ONLY BY FOLLOWING LINKS ON THE OFFICIAL AEROSMITH WEBSITE OR LOCAL PROMOTERS‘ SITES. OTHER SALES RUN THE RISK OF BUYING OVERPRICED OR INVALID TICKETS THAT NEITHER THE PROMOTERS NOR THE BAND TAKE ANY RESPONSIBILITY FOR!