AEROSMITH´s west coast US tour and meeting the band in 1999, was the point that turned my life upside down. AEROSMITH motivated me to get involved in the music business. 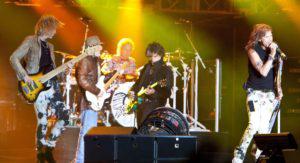 I couldn’t sleep the night before my flight – I simply couldn’t wait for this kind of adventure. “D Day” arrived on May 2nd, 1999, and for the first time in my life I flew such a long distance alone. Some people warned me to be careful at the US airport and not to speak that much, something I usually love to do, because they could send me back home. Nothing like that happened and I safely made it to Las Vegas.

I finally arrived at the glittering Hard Rock Hotel in Las Vegas. I hadn’t seen any place like it before. A huge building full of bars, restaurants, shops and, what was of course the most impressive item from the first moment on, a ton of stuff collected from famous rock’n’roll icons. I couldn’t stop staring at the guitars on the walls, all the clothes, and there was also a bike from Axl Rose. Rock music was on everywhere and it brought me to tears to listen to “Stairway to Heaven” while walking into the hotel elevator for the first time. By the way, AEROSMITH’s video clip for the song “Full Circle” was recorded by the swimming pool at this hotel. Aero Force One members were directed to a room where we introduced ourselves to the crew and got some surprises like a travel package bag, official T-shirt, stickers, photos and our tour pass. You couldn’t miss the room because AEROSMITH’s songs from their live album “A Little Soul of Sanity” welcomed us right after we stepped out of the elevator. We were 89 Aeroheads from all over the world. Most of the people came from different parts of USA and Canada, but many of them were from Japan, some from the UK, 1 girl from Italy who I shared a room with in every city, and just me from the Czech Republic. The first evening we had a welcome party at a nice hotel bar. 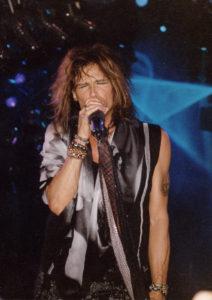 The first show took place on May 3rd at the Thomas & Mack Center in Las Vegas. Thanks to our membership in Aero Force One, we got exclusive seats in the front rows. It was the first time I had experienced a rock concert from a reserved seat. In Europe, we mostly have places for standing, especially in the main area in front of the stage. I had never before been as close to the band as I was that night. I of course risked taking my camera with me, something that wasn’t allowed. Back then, it was even stricter than it is now. I was ready. I took some extra batteries and extra film with me that I hid in my bra.

We couldn’t stop talking about what an outstanding show we saw in Vegas and couldn’t wait to see the next one in 2 days in Phoenix. But a horrible surprise was waiting for us. We got the news that the show scheduled for the Blockbuster Desert Sky Pavilion was canceled due to illness of two band members. Luckily our AF1 crew was trapped in a sun-dipped desert with a pool. We blasted AEROSMITH on high volume all day long poolside. We tried to leave our sorrows behind and enjoyed the evening at Alice Cooper’s restaurant, Cooperstown, with Cinco de Mayo spirit in the air. It was the 5th of May, an annual celebration that commemorates the Mexican victory over the French empire at the Battle of Puebla in 1862.

The next morning, we all boarded the bus for Hollywood to the fabulous Hyatt on Sunset. We learned about the Sunset Strip Tattoo Parlor across the street. Plenty of our crew, myself included, engraved our love for the Bad Boys from Boston. I hesitated for a while which song or album to choose. I decided for “Get A Grip” because it was the first time I could see AEROSMITH live. The next show happened on May 7th at the Hollywood Bowl. That was something that surpassed my wildest expectations. Having the possibility of being at the show of my all-time favorite band in one of the front rows close to the stage of such a legendary place, it totally blew my mind. Numerous Hollywood stars joined the cheering crowd. 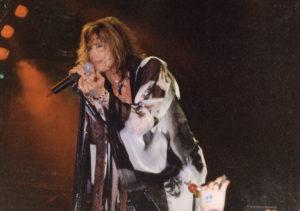 The time had come for our final destination, San Francisco. I was impatiently awaiting the chance to finally see the City by the Bay. But we got another piece of shocking news. Our final show was canceled again. That was a big disappointment. There was no meet’n’greet as the band had promised before. We headed to headquarters of AF1 to lick our wounds. The Aero crew regained better spirits just in time for a phone call from Tom Hamilton, who expressed his humble apologies for the band’s not being able to make it. He also answered as many questions from us as he could. Afterwards, we all were escorted to San Francisco’s own Hard Rock café. At our last party we all enjoyed the moment as much as we could. All of us, 89 people, were singing all together “Love in an Elevator” which became our cry battle.

I couldn’t deal with the fact that I was so close to the possibility of meeting the band but it didn’t work out for me yet again. AEROSMITH was about to start the European leg of their tour, shortly after the US tour was over. I didn’t let myself get discouraged and called AF1 headquarters in London. There was a very nice lady working there and she really tried her best to help me. She was so supportive and full of understanding. I explained to her the whole situation and how difficult it was in my situation to make it to the US for the travel package, and that I had to pay a loan for another 3 years for it. Without it I absolutely couldn’t afford that luxury package. She was shocked to learn our average salary back then, which she found out on her own after our call. Then she called me back and said she really feels for me and understands my love for the band and their music. She offered for me to come to Brussels, Belgium for the show. The fan club meeting with the band was planned there and she assured me this time it would 100% happen. I had another 4 shows on the list in Germany and Austria, so I added 1 more in Brussels.

And the meet’n’greet with AEROSMITH finally happened on June 28, 1999. Aerosmith’s US West Coast tour and meet’n’greet the band in 1999 was the point that turned my life upside down. Now I feel a strong desire to share my emotions and to pass something on to others. Not being endowed with sufficient musical talent, I decide to pass on my thoughts through written text. AEROSMITH motivated me in my resolution to get involved in the music business. But my journey in the music world is a different story.

THE ENTIRE ARTICLE  IS AVAILABLE FOR FREE IN DIGITAL FORM ON JOOMAG.COM (the apps are also avilable for iOS and Android).

MY VISUAL INTERPRETATION OF THE ALICE COOPER&CALICO COOPER QUOTES